How would you define your style?
I have been very inspired by American minimalist music, but I don’t think of myself as a minimalist composer, or even a “post-minimalist” composer, although I suppose that some elements of that style might sometimes slip into my work. My music tends to be tonal, although it can be dissonant at times. I think of melody as my primary focus. When I’m writing for voices, it’s important to me that the vocal lines will feel good to sing, and will be rewarding both to the performers and to audiences. There are many reasons contemporary composers are attracted to opera, but to me the power of the medium essentially lies in two things: the beauty of operatic singing, and the unique way in which the combination of staged drama and music can have a powerful emotional impact on listeners.

Tell us about your work American Atheiston the program of Works in progress 2019
American Atheist is the third opera I am creating with librettist David Cote. It recounts the life and violent death of Madalyn Murray O’Hair (1919–1995), at one time the world’s most famous atheist. O’Hair won a landmark 1963 Supreme Court case against prayer in schools, then went on to found the group American Atheists. Thirty-two years later, she, her son, and adopted granddaughter were abducted from their home in Austin, Texas. They were murdered and dismembered, their remains buried outside of San Antonio. The opera uses elements from a Requiem Mass to illuminate major events in O’Hair’s life. It is an irreverent yet ecstatic exploration of faith and freedom in modern America.

Why did you decide to participate to Works in progress 2019?
We are at the early stages of creating American Atheist. The two scenes that the audience will hear is all that we have completed so far, but the opera will ultimately be an evening-length work. The beginning stages of a new composition are always the most difficult, and simply having words and music completed in manuscript is just not enough. David and I need to hear it performed and it is very helpful for us to consider an audience’s response to our work-in-progress so that we can evaluate how best to proceed. We also plan to work with a director soon to help shape the development of the opera. We are so grateful for the opportunity to be included in Chant Libres’ Oper’Actuel Works in Progress this year.

Can you share a link emblematic of your work?
Promotional video for The Scarlet Ibis by Stefan Weisman and David Côté: 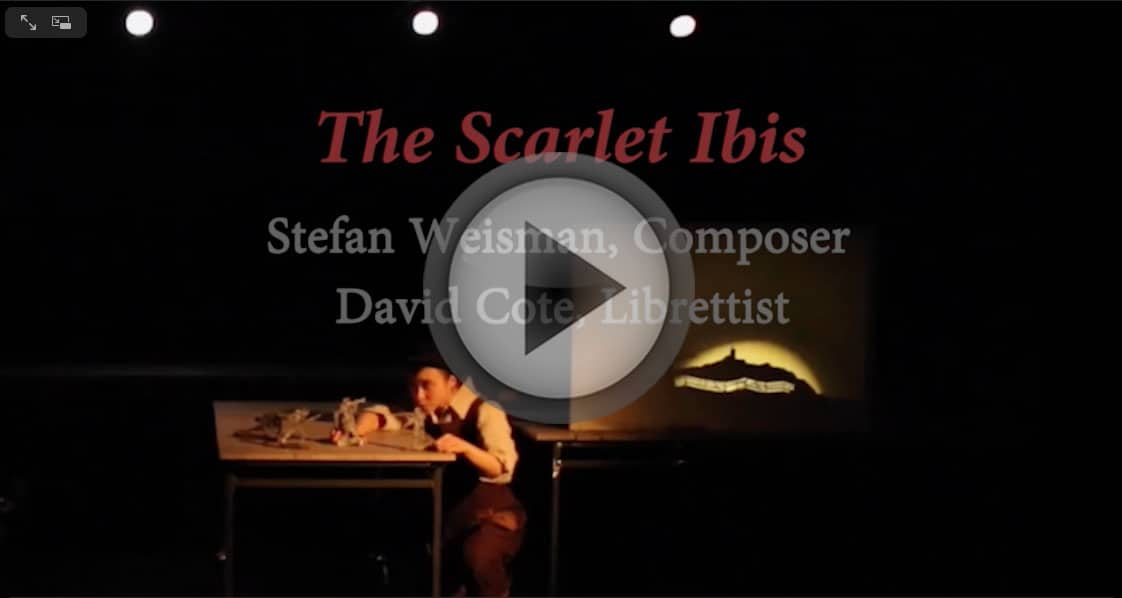 Your favourite instrument?
I have a sense that a composer shouldn’t pick a favourite instrument because each one is wonderful in its own right. The violin was the first instrument I learned to play as a child, and I still feel a kinship with it. Early on, I studied the piano as well, and that’s the instrument I most often play today. However, with all of that in mind, I love the warm sound of a cello, which can be so expressive. I’ve also always loved the particular timbre of the oboe. There is just nothing else like it. I inherited a professional quality oboe from a family friend, and even took a few lessons, but it was just too demanding and difficult to learn. Maybe one day I’ll try again.

Last favourite disc, performance, exhibition, TV show or movie?
There are so many things I could mention, but the first thing that comes to mind is a CD I’ve been listening to recently. Years ago, I bought hundreds of CDs that have just been sitting in my apartment unopened. I decided that I would make it my mission to load all of them onto my iPhone to keep me occupied during my commute to work. Many of these have been interesting and worth hearing. However, one recording stood out and made a powerful impression: the eponymously named record by the American composer Moondog. His music is just beautiful, and confident, and unlike so much out there, it has a bright and ecstatic quality to it. His style is a pre-cursor to minimalism and apparently he inspired both Steve Reich and Philip Glass. I really related to this music, and found myself listening to that recording on repeat for many days.

An excerpt of American Atheist will be presented at Oper’Actuel – Works in progress 2019.